I may have mentioned that last summer, Mrs. Edge and I spent the summer working out at a gym with a trainer. This was a result of my health scare combined with her thinking about getting lipo. We decided to give the harder route a try first.

We’d meet after work and on alternate days we would run our asses off on a treadmill, or would lift (or pull or push) weights. By the end of the summer I had lost 15 pounds, but more importantly, had toned up pretty well, and had learned how to exercise properly. Mrs. Edge kept going for another month, and developed some nice muscle definition for the first time in her life. Her back and shoulders were strong and she was getting that sexy V shape. I’ve documented my own progress through some of my HNTs, although I’ve been modest about mentioning how hard I worked at it.

Then the holidays hit. Thanksgiving turned into Christmas, and three months of eating, combined with the winter doldrums saw me gain 10 of those pounds back. When my formerly loose pants started to get snug again, I knew I had to act, if only to not be embarrassed about posting more HNTs. I mean, how many shots of my arm could I get away with? 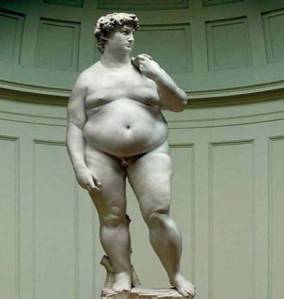 I didn’t really look like this, but I felt as if I did.

I bought a multi-purpose bench and a boatload of weights and made room in the “Utility Room,” which is what they euphemistically call the large closet that houses the washer, dryer, ironing board, pantry shelves, winter clothes, old toys, and the cat litter boxes. Since March, I’ve been making a point to work out according to the schedule we’d had the previous summer, concentrating more on my stomach and upper body. On Monday and Fridays I do 20 to 45 minutes of arm, shoulder, and chest exercises, and on Wednesdays I concentrate on lower body. Tuesdays, Thursdays and Saturdays I do various abdominal exercises. Several days a week after work, I take off for a 5 to 7 mile bike ride in which I try to keep to 20 to 25 minutes at about 15 mph. That takes care of the cardio. Even after buying some good running shoes, I still have a hard time with running more than a mile or two; my legs and ankles just aren’t adapting, I get shin splints, and all sorts of aches and pains, probably from pounding the pavement with 20 or 30 more pounds on my body than I should have.

The point of this is that after several months I finally started seeing some progress in in getting back to where I’d left off, and lately I’ve been feeling pretty good about that. My pants are getting less snug, I’m seeing more definition in my arms and shoulders, and the other day I even noticed (finally!) some muscle definition around my abs.

Of course, I had to stand just the right way and suck in my gut, but hey – you’ve gotta take the little victories when they come, right?

So one morning I’m admiring myself in the mirror, interfering with Mrs. Edge as she’s getting ready for work, and I was going on about some imagined improvement or another, wondering aloud which clothes would enhance my physique, when she gave an exasperated grunt.

See, here’s the thing. Guys in our society, especially from my generation and before, don’t really think about how they look. A few gray hairs, a few wrinkles, a few extra pounds don’t seem to matter. With 20 women’s stores for every men’s store in your average mall, we’re simply not used to thinking about ourselves in that fashion. And I actually do feel a little silly looking at my body and trying to spot the small changes that happen over the weeks.

In fact, last year, the trainer, trying to psyche me up, said “Why are you here? Why are you punishing yourself like this?”

“Uh, no, dude. I’m really here because I need to get healthy again.”

He looked at me for a moment and said, “Well, most people say that they’re trying to look better.”

Vain? Personally, I realized that I hadn’t thought much about my own body in 20 years. Back in my late 20s and early 30s, I used to exercise a lot, and my job required a lot of physical labor. While I might have had an extra 5 or 10 pounds at any one time, I maintained the same weight and clothing size for years. That started changing when I hit my mid to late 30s. I modified my lifestyle, but at some point in my mid 40s I began spending more time behind a desk. My house was finished, so I did less work outside. And frankly, Mrs. Edge and I had hit a low point in our relationship which left me somewhat depressed, adding to my lack of concern with the changes happening to me. And stress at work, stress over other family situations, stress at work, stress over money at home, and stress at work have also taken their toll.

Vain? The last year or so has been a “project” for me to get my body back to where I think it should be. I’ve been taking meds to lower my cholesterol and blood pressure, but I’ve managed to shave 50 points off the cholesterol just through a change in diet, and I’ve dropped a few points in my blood pressure just from kicking up the exercise.

Vain? I’ve cut out almost all dairy products, most fats, and cut way back on bread and wheat products. A typical lunch for me is a couple of slices of turkey breast, some lettuce leaves and a dab of mayo and mustard on high-fiber, whole multigrain slices of cardboard bread. I might have one or two hard boiled eggs a day for protein, with a measured 1/4 cup of unsalted almonds. I’ll cut up an apple and sprinkle cinnamon on it, or take some sections of other fresh fruit. I limit my “treats” to that one plain donut at our weekly production meeting, and maybe every couple of weeks an ice cream with my daughter.

Vain? I bought myself a heart rate monitor that calculates how many calories I’m burning so I can better tell how much activity that I’m getting during the course of the day. I find that I’ve become almost-but-not-quite obsessed with choosing the best carb/meat combinations at a restaurant, the routine that will burn the most calories for me, the bike route that will give me the best cardio workout.

Vain? Let me tell you, friends; this is some hard freakin’ work, and it’s not fast! It is very time and labor intensive. I remember musing last year with the trainer on how so many people come to the gym, expecting to “fix” ten or fifteen year’s worth of poor diet and lifestyle choices in 12 weeks or less. He told me that a quarter of the people drop out after 3 to 4 weeks into the program. That’s probably because you don’t start seeing any good results until at least 2 months into it, and that many people think that serious training is supposed to work miracles. He also thought that a few of the people, even though they have a diet plan that goes along with the workout program, tend to think “Well, I burned off 500 calories at the gym, so that means I can have that bacon cheeseburger for dinner.” It’s human nature, and I don’t blame people for getting frustrated. At least once a week, I get frustrated, too, thinking about how much energy I’ve been burning and how much time I’ve put into this, and how much food I’ve been passing up at parties and picnics.

Vain? I know that at the rate I’ve been going, I can expect to take another six months to a year in order to get to the point where I only need to worry about simply maintaining instead of losing. That’s a daunting prospect; too late many of us realize how much easier it is in the long run to maintain what we have than it is to try to repair the damage.

Vain? While I’m ashamed to have let myself go as far as I did, I’m also proud of my accomplishments. I feel better physically, and I’m starting to look better, as well. That makes me feel better about myself, which encourages me to keep at it. And Mrs. Edge has noticed the difference, too; I think that she’s just tired of listening to me turn my body into a project, obsessing over the little details. And taking up her mirror space while she’s trying to get ready for work.

Anyway, one of the reasons that I’m telling you this is because it helps me affirm my own commitment to this “project.” I’m not out to become a body builder. I am, however, committed to bringing my physical body to be more in sync with my mental age.

Now if you’ll excuse me, I need to go take a shower while there is still some daylight; it makes it much easier to see the muscle definition on my back and shoulders. . .