Dev posted an interesting picture, cribbed from Male Submission Art that depicted an angel sodomizing Satan (or possibly another demon). That led to a discussion about the cultural perception that whoever is penetrated is somehow identified with submission.

The flip side of that perception, of course, is that whoever is doing the penetrating is in a position of dominance. A side issue is that nobody wants to be penetrated unless they have a reason to be submissive. Not surprisingly, these types of issues are often discussed in those groups in which people — men and women — have an interest in strap-on play, specifically, men who enjoy being penetrated by their women partners. 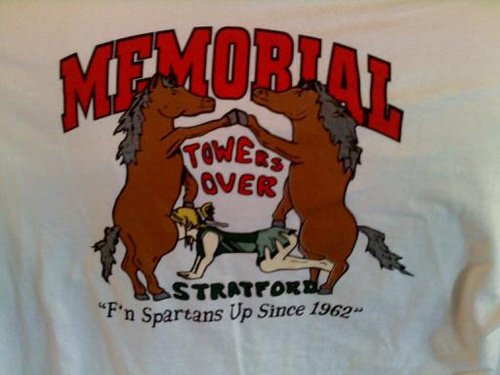 With that fresh in mind, I was startled by this picture from one of my new faves, Sociological Images. Apparently, fans of a Texas high school football team — that’s a high school, not college, mind you — had a small number of these shirts printed up to show their support of the home team against some long-standing rivals. Note that despite the blatant images of two stallions violating the cheerleader (because that’s what this, in context, most certainly represents), they chose not to make the shirt too offensive by abbreviating the word “Fucking” so as not to be too obvious.

We should all be proud of such sensitivity.

This picture pretty much sums up the “take it, bitch!” attitude that is so prevalent among the sexual hoi-polloi — and indeed, even among those who really should know better.

Recently I was watching some “reality” tv show (actually, Mrs. Edge was watching it while I was net surfing on the laptop), a scene with a groups of 20-something guys happened to catch my attention; they were identified as “players” and made comments about how they a) made a point to have sex with as many women as possible, and b) decided that women who gave in (i.e., decided to have sex) were no longer worthy of their respect. What kind of convoluted logic is that? More irritating is that these idiots talked about the women in terms of hunting and conquest, and not in terms of enjoyment.

But let’s take this a step farther.

And yes, this is fantasy, not real life. That should make it different, right?

Yeah, sure. But if you consider that fantasies play out in the context of the culture of the the partners, isn’t it possible that those of us who enjoy sexual subjugation can only do so when the concept of real subjugation is extant in society? That is, in a culture in which “Fuck you!” never had the connotation of penetrative violence, could such fantasies arise?

29 Responses to Take it, bitch!