Ruin ALL the things!

Not hers, of course.

She’s long been aware of the idea that some of my orgasms aren’t actually pleasurable, and over the years has, at times, been quite taken with the notion that she has some power over that. Generally this has taken the form of getting me aroused enough (usually after several weeks) to ejaculate while I’m still locked into my chastity device, but she has occasionally experimented with “forcing” me to release by using a vibrator on the device, or sometimes pressing the Hitachi directly on me. Both situations give me a sensation of slightly reduced arousal, which paradoxically seems to make me even more aroused the next day. I suspect that this is because after several weeks of arousal, my body is expecting to have an actual, mind-blowing orgasm; but when my brain checks in the next day, it sees that the tubes haven’t been properly cleaned. Or something.

Anyway, we haven’t been doing the chastity thing much this year, and since we have both been in pretty stressful job positions lately, our intimate life has suffered a bit. So, a few months ago I was suggesting some ways to spice things up a little, and among some of the ideas I floated were ruined orgasms when I’m not locked up. She didn’t explore the issue, and we went on to discuss other things; I figured she had forgotten about it. Until December, that is.

One night, we were laying in bed reading (we usually sleep nude), and she reached over and began stroking me. This is always a welcome surprise, so I asked her to use some lube or cream, and if she would consider finishing me that way. She grabbed a bottle of hand lotion and continued to stroke and tease me, until I was writhing on the bed and lightly (very lightly — damn kids around) moaning. As soon as I was ready to come, my hips lifted off the bed in expectation, and and she stopped stroking as I felt her grip tighten firmly around my shaft. My hips bucked a few times, and my moans turned into a groan of surprised frustration. And then it was over. 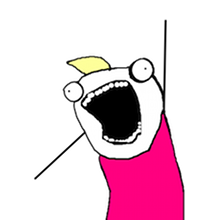 Ruin ALL the orgasms!

“You’re frowning,” she said, looking at my face. Yeah, no kidding, I thought. She went to get a towel, and when she came back she said “I don’t think that I did it right. You’ve got come on you.” Yes, some had leaked out after she let go, which is to be expected. I cleaned up, thanked her, and we drifted off to sleep with murmurs of needing more practice. The next morning I was quite hard, and woke her up for a little action. Despite being aroused, I didn’t feel the need to come, so I left her to go back to sleep for a few hours.

A couple of weeks later, we were in the same situation; she was stroking me, and I asked her if she wanted to practice a little more. She thought it was a good idea, so we grabbed some lube, and within a few minutes she had me very aroused. While she stroked me, I tried to explain that instead of just wrapping her fingers around me, that she might have better control pressing her thumb along the underside, closer to the base of my shaft. Knowing that the urethra passes closer to that area, it seemed like a good idea at the time.

Mrs. Edge knows what I like, and after a little while I had to stop talking. Well, it was more like she had gotten me to the point where I was just babbling, anyway. And once again, just as I arched my hips I felt her squeeze, and her thumb bore down HARD. I felt my hands scrabbling at the sheets as my PC muscles tried to contract. I let out a small groan of frustration, and a few moments later it was all over. When she finally relaxed her grip, just a few drops leaked out.

“How was that?” she asked me. I had a hard time answering, in part because I was in some odd state of mind. The immediate need to come was gone, but nothing felt right; as far as my body was concerned, it wasn’t over over. On her part, she was again a bit disappointed to have allowed a few drops to leak out, and I had to assure her that with everything that goes through the plumbing, a few drops was perfectly normal.

We’ve now been practicing a bit more often; I’ve been agreeing to refrain from orgasm during intercourse so she can practice on me right afterward. And like so many things with regard to sex, this is something that sounds so freaking hot when you’re aroused, but then seems like a really stupid idea when it comes to actually doing it. I mean, I don’t  know about you, but I like orgasms. I love the explosive release, and the warm satisfaction immediately afterward. What the hell is the idea of leading all the way up to that, and stopping just short?

Goddam brain is paying tricks on me.

When I can step outside of myself to watch, though, I enjoy seeing Mrs. Edge move from a more passive form of ruined orgasms (that is, the involuntary releases that I’ve had) to a more active role. Her intentional ruining is, to me, exciting to think about (at least, beforehand), and she, herself gets excited about “practicing” (as she calls it). I know that she enjoys feeling me orgasm completely when I’m inside her, but this new-found hobby is also giving her a nice thrill, and allows her to gently explore her feelings about control. So, as long as she’s willing, how could I possibly pass that up?

The Grey Geezer Dauntless defender of, um, something that needed dauntless defending. Dammit, I can't read this script without my glasses. Hey, you kids, get off my damn lawn!
View all posts by Tom Allen →
This entry was posted in Chastity & Orgasm Denial, orgasm control, orgasm denial, Ruined Orgasm, Sexuality & Relationships, True Tales and tagged chastity, orgasm denial, Ruined Orgasm. Bookmark the permalink.

19 Responses to Ruin ALL the things!