Having now modified my new A080 chastity device to be wearable, it’s time to get to the part that everybody wonders about: the stats. 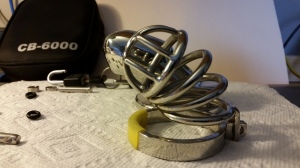 The A080 shown next to The Fort for comparison. Just a little smaller than the CB3000, and about the same as the CB6000-S, although it’s hard to tell because of the CB6000 aerodynamic nose, as opposed to the rounded end of the A080.

The A080 is a little shorter than the old CB3000, with a slightly smaller inner diameter. Because of the odd shape and difficulty in agreeing where to measure to, it’s hard to compare them directly, but it’s probably closer in size to the CB6000-S — the shorter version of the CB6000. The inside diameter is about 1-5/16, slightly smaller than the 1-3/8 of the CB-X devices.

The cage, cuff ring, and locking pin all seem to be stainless steel — although my guess is that for $25 it’s made from the inexpensive 18-8 alloy 302 or 304 instead of the more expensive (and more chemically inert) 316, as are the devices made by Mature Metal. However, since 304 is approved for some medical use, and is found in commercial, industrial, and home kitchens all over, 304 stainless steel should present no problems for anyone wearing it. 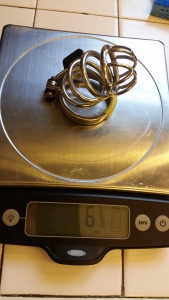 Readers will remember that my Fort device weighs in at almost 6-1/2 oz for the cage alone, and over 12 oz for the assembled cage, ring, spacers, and lock. In contrast, the polycarbonate CB3000 cage is a light 1-3/8 oz. The A080 cage weighs an easy 3 oz, and the rest of the components only bring the unit up to whisker over 6 oz, or just about 2-1/2 oz more than the assembled plastic CB3000. Since I use that heavy stainless steel ring for both the Fort and the CB3000, the A080 ended up feeling surprisingly lightweight.

The flat, wide cuff ring bears more weight than the more rounded plastic version, or the thinner stainless steel ring that I made, and that may account for how well it supports the device. Of course, metal cages are mostly air, so there’s not as much to support. That said, I still am not crazy about the edges of the cuff ring; even though they are well buffed, I’d prefer something with slightly more corner rounding. 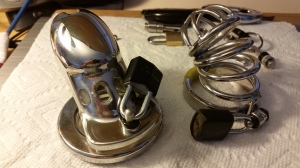 The assembled A080, shown next to The Fort. The open cage design is a lot easier to maintain, and is less than half the weight of the cast stainless steel Fort.

I wore mine all day doing yard work, and even in loose shorts it did not feel strained, nor did I have to stop to adjust myself frequently — something I need to do with the Fort, simply because it weighs a lot more, and it drags things down. Relaxing in the evening was similarly comfortable. I will note that I could barely wear the device as shipped because the slop and loose fitting parts caused a lot of pinching and catching. Anyone picking up this, the A081, or one of those devices with a similar locking arrangement would do well to file a flat section on the head of the locking pin to make for a better fit, and to put some spacers (rubber O-rings or anything else) to help to keep the cage from moving up and down or twisting sideways.

Filing a flat onto the head of the locking pin will help it to seat flush with the locking tabs on the cuff ring, and prevent the device from shifting.

Sleeping in the device was interesting. The plastic CB3000 pretty much goes wherever my nighttime hydraulics point it, as opposed to The Fort, which weighs everything down like an anchor. The lighter A080 was somewhere in between; I felt it a few times in the night, but is was never uncomfortable enough to wake me up.

And speaking of not being woken up, this cage is one of the shortest things that I own, and I imagine that it helped to keep those middle of the night erections from pulling the cuff ring away from my body. I don’t remember having any of those “Ow, my testicles are being ripped from my body,” moments. This could be the length, or the wider, flat cuff ring.

The next day I showered, and this is where the open cage design excels. No trying to squeeze soap inside the tube, no worries about not rinsing properly, and (presumably) no funky smell when it finally comes off. I put on my skinny jeans, and went out to do some errands.

I did have some pinching and adjusting during the day, but that could have been because I chose not to put any lube around the cuff ring, and the the rubber tube around the hinge might have been making things a bit too sticky. In fact, after most of the week with tubing, I took the tubing off, just to compare the friction pulls of the rubber against the edges of the bare hinge. I’ll update on this later.

There were a few times, though, that the seam of my jeans or underwear managed to press across the rings, and I could feel the cloth against my sensitive areas. It didn’t hurt, but it was unexpected and a bit uncomfortable. I’m not sure why I’d notice it now, when I don’t notice it when I’m not wearing a device. I suspect it’s because the cage stretches out some skin in areas that are normally a bit more, umm, turtled. I’d also guess that the A081 would be less prone to this because of the orientation of the cage bars.

The A080 and A081, by the way, are made with a missing vertical front section (think of the dome for large telescopes) instead of radially extending from the center. The reason I chose this design is because over the course of the day, my urethra changes its aim. I have no idea how guys aim in a device with that tiny center hole. I like being able to use a urinal, and certainly not needing to worry about my stream dribbling all over my leg is a plus.

The A080 is probably the lowest profile, and least noticeable device that I own. I have not detected any bulge with shorts, casual pants, or tight jeans. Even my boxer briefs don’t show much — a factor of the lock hanging off the side of the device, instead of showing up as a big lump in front. For that matter, I can imagine the entire lock and pin being replaced with a two-piece security screw/bushing arrangement that would be even less detectable.

And speaking of security, Mrs Edge has been opposed to open cage designs because she imagined that access to that skin would allow me to stimulate myself too much. After several days in this cage, though, I haven’t been able to manage anything that even gets me close. The A080 is a little smaller and shorter than my other devices, so it’s possible that being scrunched up is a factor. Also, I think that ten years ago, when chastity devices were new and exciting to me, it might have been a different story. But now? Wearing a device isn’t as arousing, and I’m pretty accustomed to waiting until I have permission; the thrill isn’t there anymore. I’m not saying that nobody would manage, just that for me, it’s working as expected. I haven’t tried the Magic Vibrator on it (yet), but I may save that for when Mrs. Edge gets home. She doesn’t approve of me using it, for some reason.

Anyway, I’ve spent a lot of time reviewing the A080 because a) Mrs Edge is again off visiting family for a couple of weeks, and b) it was a holiday weekend, but it was rainy here in New England, and I was cooped up inside for most of it. So let’s get to the review:

It’s shiny, polished stainless steel. Yes, I said that about The Fort, but even though the A080 is an open cage design, you can’t deny that the shiny metal is eye-catching. It actually looks like a nice piece of body jewelry.

It’s easy to clean, and easy to remain clean inside. There’s no question that one of the worst aspects of the closed tube designs is that they are potential bacteria traps. Even The Fort will retain a slight odor, no matter how much I flush it out with the removable shower head. The plastic devices are even more prone to odor. The A080 passes the hygiene test very nicely.

It’s lightweight. While not as lightweight as the CB-X, Holy Trainer, or silicone devices, for a metal device the A080 won’t feel uncomfortable, even if you’re wearing loose dress pants. By the middle of the first day, I pretty much forgot that I was wearing it. Even in bed (I sleep in the nude), it was barely noticeable as I moved around.

The cuff ring is a torture device. Chastity device manufacturers have simply not figured out that hinged cuff rings are a solution in search of a problem. Yes, you need to wrangle your junk into a solid ring. But hinged rings create chafing and pinching surfaces on the bottom and on the top. Plus, they are still difficult and fiddly to connect to the cage. And putting a bit of surgical tubing over the hinge is not an elegant solution.

The locking system is kludgy. Not just the hinged cuff ring, but the way that the cage attaches and locks to the cuff ring looks like a complete afterthought.  I can modify most devices, but not everybody has the tools or skill — nor should they need them. The sloppy fit of the pins and tabs, plus the semi-lethal padlock guarantee that somebody is going to end up getting hurt.

The stacked ring design does not feel like a boner. Oddly, Mrs Edge likes how the CB3000 and The Fort feel against her ass when we spoon at night. The smooth plastic (or metal) shape feel like an erection, and she falls asleep imagining that I’m aroused and desirous. The rings won’t quite have the same feel for her. Note that this is not necessarily a bad point, but it’s something I noticed.

It used to be that chastity veterans would recommend that newbs purchase a CB-X device so they could get the feel for things before they jump in and order a more expensive metal device. The A080 and A081 are roughly between $25 and $30 US, making them a good first device for guys that can manage to make some simple modifications to the locking pin.

I am going to spend some time trying to figure out how to make a nice solid cuff ring for the cage, which will give me a customized clone of a Mature Metal device. Yes, I could just buy a Mature Metal device, but the $300 price tag means I’ll have that much less to spend on bicycle components. Since we are not doing the 24/7/365 chastity thing, the A080 offers a nice compromise on an open cage design, even if I have to do most of the work myself.  That said, while it’s a fun project to turn one of these into a better device, I don’t think that I’d recommend it to anyone who does not have the time or the tools to make similar modifications.

Well… maybe not *all* my Tumblrs…

The Grey Geezer Dauntless defender of, um, something that needed dauntless defending. Dammit, I can't read this script without my glasses. Hey, you kids, get off my damn lawn!
View all posts by Tom Allen →
This entry was posted in A080, CB3000, CB6000, Chastity Devices, Mature Metal, Metal Chastity, The Fort and tagged chastity, Chastity Device, male chastity, male chastity device. Bookmark the permalink.

13 Responses to Tally me banana: Part 2