Apparently I hit the wrong button, and accidentally posted an article that I was saving for later. After I’d had a chance to, you know, actually read it.

Anywho. since a few people have already commented, I’m going to retcon this post because I think that it’s worth a look.

The author (who posted this on a Reddit group that I follow) is trying to make the point that sex — or more correctly, PIV intercourse — is on the table for virtually every transactional aspect of his relationship, and that locking up his cock removed that option so he could end up having a more emotional connection.

BTW, at the end of this post, I’ll have an ebay link to a bridge in NYC to which I have exclusive rights, and I’ll be happy to sell it to you.

He starts off with this:

Simply put, I had no idea how much of my daily interactions with my wife were subtle negotiations for sex, but my wife sure did. She’d come to accept it as part of being married to a man. But now, if my hand lingered too long on a caress, my cage made the motivations painfully obvious. Call it cognitive behaviour therapy for my penis.

I’ve been reading about this kind of thing for 15 or 20 years now, and frankly, I’m so put off by it that I usually just click past a page or post, because it seems to come from a place in which the guy thinks he *should* be saying something like this. It positions male sexual desire as some kind of savage or yucky aspect of sexuality that needs to be relegated to the basement.

Also, men who see *every* interaction as a sex-laden transaction or negotiation are morons.

Beforehand, her being playful with me was viewed primarily as an invitation to sex. Now it could now exist on its own. My listening to her day wasn’t partially “putting in the time to earn sex,” because sex wasn’t an option. I was liberated to enjoy the act of listening.

I have no idea what he’s saying, but I can’t blame people who might be interpreting this as “This guy was very self-centered, and it took a sex toy to make him more focused o n his wife as a real person, instead of as a way to meet his physical needs.”

Oh well. All that said, the article itself wasn’t all that bad, once I’ve stepped away from it for a bit. I really get tired of people (mainly men) attaching some kind of intrinsic spirituality to something as simple as not having an orgasm. Hopefully he did get some kind of insight from all this, and I hope his wife will eventually reap some benefits from this.

Oh, I guess this LOctober thing is nearly over. At least, for some of you people. For some of us others, not so much. 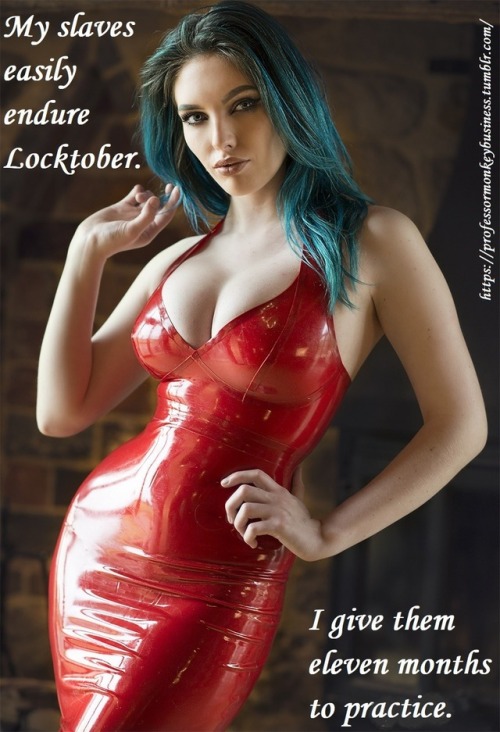 The Grey Geezer Dauntless defender of, um, something that needed dauntless defending. Dammit, I can't read this script without my glasses. Hey, you kids, get off my damn lawn!
View all posts by Tom Allen →
This entry was posted in Chastity & Orgasm Denial, LOctober, male chastity, NO-vember, orgasm denial, Sexuality & Relationships and tagged LOctober, male chastity, orgasm denial. Bookmark the permalink.