I can’t remember my last orgasm.

There’s a certain irony to this — cruel or amusing, depending upon your mindset — because as most of us know, chastity is a game of numbers. Nobody presents this as well as Thumper, who has some of the most analytical charts and graphs that one could imagine. But a visit to any chastity related web group shows that many, many of the posts are all about “I’ve only had x orgasms in y [time period].”  Guys constantly talk about trying to hit some milestone (“My first time locked up for a week/month/30/60/90 days.”), or they try to beat their previous record.

I’ve written somewhere that the most cruel thing that you can do is to lock a guy on January 1, and then unlock him on December 27th, and force him to have an orgasm just a few days shy of that daunting one year mark.

Anyhow, I’ve been thinking about this lately because Mrs Edge and I seem to have unintentionally wandered down the “permanent chastity” road, and…

Okay, yes, there’s some ambiguity about how people use the term “permanent.” In our case, “permanent” means that the device never comes off, except for travel or medical reasons, and that I will never be allowed to have an orgasm, or at least, an uncaged orgasm, full, ruined, or otherwise (we can’t help those involuntary releases that I still seem to get in the cage). And since Mrs Edge enjoys her PIV, all of our intercourse (which we’re having much more frequently, for some reason) is with my “replacement” cock, our Vixskin Tex (formerly sold as the Boitoi).

So. As I was saying, we didn’t intentionally set out to do this, we just sort of… ended up here because we were having such a good time doing what we were doing. And as a result, it’s looking as if my last orgasm, as the joke goes, may well actually be my last orgasm.

And I can’t remember when it was or anything about it. 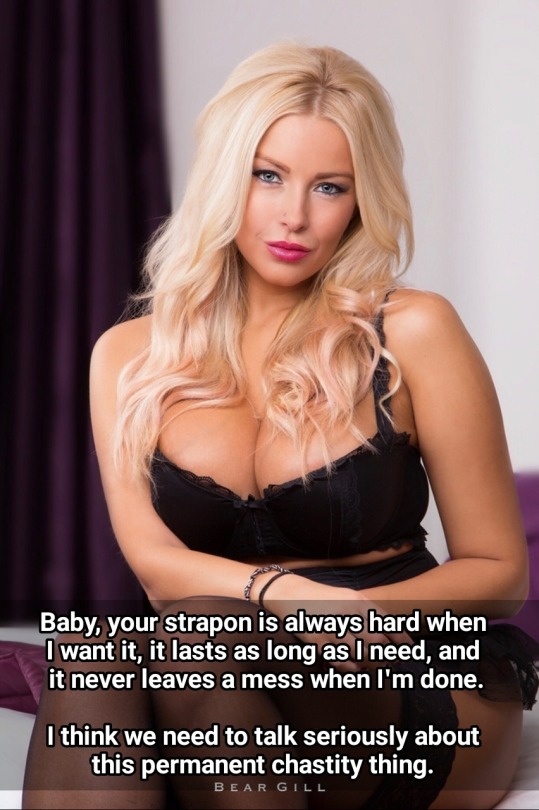 Mrs Edge says that she wants me to take a few years to think about it. More captions at: http://Mrs-Edge-Says.tumblr.com