Over the years, I keep getting sucked into discussions in which some person asks a question about “permanent” chastity, and the thread devolves into a mess in which most of the responses are about defining “permanent” and then arguing about whether someone’s ideas meet some arbitrary standards. The original question ends up being completely overlooked.

This is something that I’ve been thinking about for a while, but only recently had the light bulb blink on.

We all “know” what the term “permanent” means. Unfortunately, none of us can agree on it.

Because the conversation come up several times a month, and because everybody has their own variation on the definitions, I’m going to propose a matrix, similar to those political or religious ideology matrices that you see all over social media.

For you geeks, I’ve defined the two variables as: Caged (i.e., the wearing of a device) and Denial (i.e., the allowing of orgasms). This is because whenever we discuss it, the two are inevitably intertwined, which is one of the reasons why we can’t seem to agree on the terms, or we spend so much time explaining our own definitions.

I’m attaching a picture for clarity. 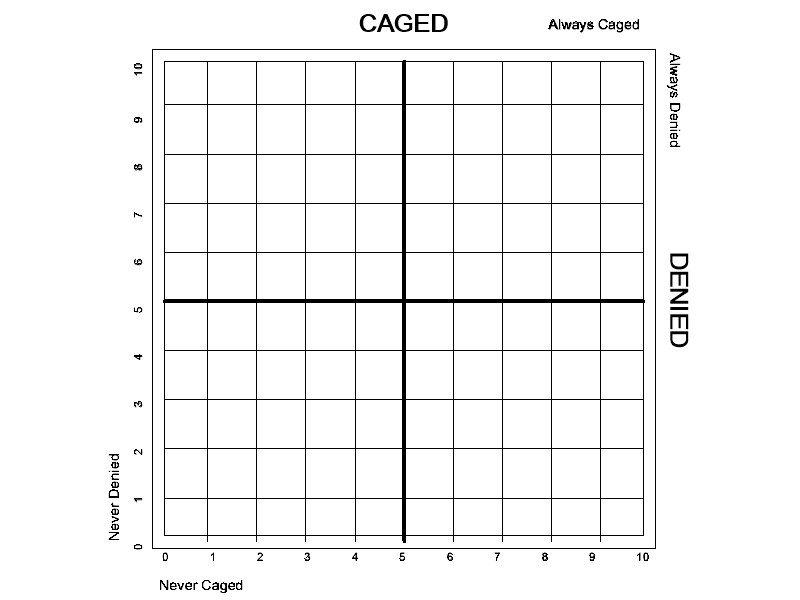 Defining the Caged (x) axis:
(There’s going to be some subjectivity to this, which is fine.)

0: Obviously, never locked, perhaps not even owning a device.
1: Has a device, worn sometimes for play.
2: Wears the device for extended play (a weekend, or maybe a week once in a while).
3: Wears it for extended play, or fairly frequently
4: Wears it frequently, maybe several days a week, or maybe a week or two at a time.
5: Wears it roughly half the time.
6: Wears it more often than not, with frequent removal.
7: Wears it almost all the time, but unlocked for certain occasions or situations.
8: Always worn, with infrequent removal (medical, travel, etc.)
9: Always worn, including travel, and their doctor has seen it.
10: Essentially permanently installed.

Defining the Denial (y) axis:
(Again, assuming that there will be some subjective evaluations)

0: Always allowed to have an orgasm, perhaps frequently. Denial isn’t even in the vocabulary here.
1: Almost always will get an orgasm.
2: Orgasm rarely denied
3: Usually gets to orgasm, although there might be a surprise ruin in there.
4: Orgasms may not be guaranteed, or possibly used as a reward.
5: Orgasms maybe half the time, perhaps ruined.
6: Orgasms are usually denied.
7: Rarely allowed orgasm, although possible ruins/milkings allowed.
8: Orgasms not allowed, although may have accidental ruins or emissions.
9: Orgasms not allowed, ruins not allowed, may possibly have accidents.
10: Orgasms and emissions never allowed.

For example, in my own situation, I’m locked up except for travel, medical, and similar reasons. I remove the device about once a month for a good scrubbing, and it goes back on That puts my Caged score at about 8. Likewise, Mrs Edge no longer allows me to have an orgasm, but once in a while I’ll have an emission of some kind in the cage – and I suspect she intentionally pushes my buttons to trigger them. So, on the Denial score, again, that’s about an 8. This means that when I’m describing how our relationship goes, 8,8 is a good shorthand description in the context of having a discussion about long term or permanent.

Some guys use the term “Permanent” to mean that they are always locked up, although they are frequently unlocked for playtime. Those guys could quickly describe their situation as, for example, 4,7, or 6, 8. Really hardcore players might be 9,9 or higher.

I floated this idea a while back, refined it, and recently floated it again. The scales are based on feedback from users at The Chastity Forums and Chastity Mansion, and a few other places.

Since we have so many geeks in this community, I tried to keep to the convention of using an (x,y) scale, and labeling it alphabetically (Caged, Denied) to make it easier to remember. I suppose people could also label themselves (for example): C8, D8.

Notice that I started off talking about “permanent chastity,” but I’m not even using the term in the scale. That is because I’ve discovered that there’s really no way to use the term objectively that won’t cause disagreement or confusion. Instead, the scale now becomes an easy way to describe one’s state of physical access and orgasm denial. By getting rid of the word “Permanent,” we toss out the baggage and various connotations. attached to that word.

Finally, I fully expect that there will be someone who will claim that this scale isn’t enough for them, and that their idea of “permanent chastity” goes up to 11.

(Edited for clarity, and to change the word “chastity” to “caged” where relevant.) 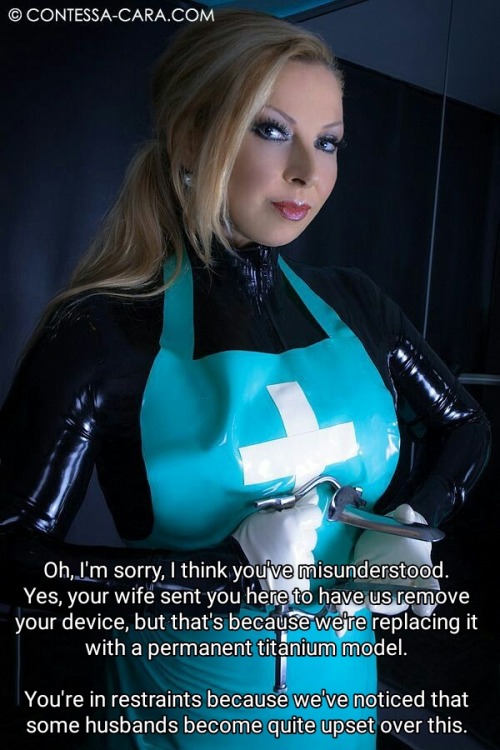 Mrs Edge says that the’s pretty sure she mentioned that part when she dropped me off at the clinic.

25 Responses to The Chastity / Denial Matrix