Even thought I’m still working, I seem to have a little more free time on my hands because of how slowly things in the manufacturing world are moving along. This has given me a chance to look over some of my old posts, and this one seemed relevant to my current situation.

Re-reading my post from the other day, I don’t want to appear to be disparaging toward those people who are – quite literally – counting the days and hours either since their last orgasm or until the next. Back in the fall of 2003, I was pretty much doing the same thing with Mrs. Edge. “How many days has it been, now?” she’d ask, and I’d usually know immediately “Today is forty nine days,” or “Friday will be one hundred days;” to which she would half-jokingly respond “You mean the first one hundred days.” And then it would be all hot for both of us and we’d rush off into the bedroom to grope each other.

See, when you first start out – like anything else – it’s new and exciting. For men, it’s very likely the first time in their lives that they’ve gone more than a few days without an orgasm from sex or masturbating, so it’s no wonder that some of us count the days. But at some point, at least for some of us, it’s no longer about the numbers. It’s about dealing with the frustration of our arousal, it’s about controlling our urges, it’s about learning how to derive pleasure from pleasing your partner, and it’s about overcoming our temptation to cut the damn lock and take matters into our own hands.

Yes, it’s easy (sort of) to go along with the constant arousal when you know that on the weekend your partner is going to unlock you and you’ll get to have sex. Even two weeks in the device isn’t horrible when you know that your reward is going to be a tremendous orgasm, especially when your partner is looking forward to it as much as you are. It’s much more difficult to learn to cope with longer-term denial, however, especially if you have no idea when your partner might next allow you that pleasure.

I don’t want to make this wound all “woo-woo,” but there is – or can be if you’re willing to go there – a transformative quality to orgasm denial. When Mrs. Edge and I first ventured into this, back in the fall of 2003:

We played with it for a day or two, and in the course of talking, I mentioned that there was a new model on the market (the CB3000 had just come out a few months earlier). She looked at the website and decided that we needed to order one. I got a little embarrassed and explained that I’d already bought one a couple of months earlier, just because it seemed like such a cool thing. It was back at my apartment, where I’d wear it at night or on weekends. “You’ve got to go get it,” she said, and the next day I picked it up after work and showed her how it worked. She seemed thrilled, and kept touching the device, even after it was on.

We talked about this for a bit, and decided that instead of trying it out for a couple of days, to give it at least a week, maybe two, before we’d make any kind of determination. Partway into the second week, we talked about making it three weeks. By the beginning of the third week, we agreed on going for a month. Thanksgiving came in there someplace, and family and friends who knew about our separation were surprised to see us pawing and touching each other like teenagers. It was new, fun, sexy, and frankly it was the first time in years that we spent time talking intimately.

For the first few months, Mrs. Edge would unlock me about once a week to have sex – not for my benefit, but because she prefers intercourse. This alone deserves some comment: Mrs. Edge is not one of those “The submissive male should not have intercourse with the Superior female” types; in fact, she has wondered what kind of man-hating neurotic women would bother to dress up in fetishy outfits and uncomfortable boots and top it off by not allowing themselves the reward of a good fucking. I’ll let Bitchy Jones answer that question while I go on to other topics.

While unlocked for sex, I was specifically instructed that I was not allowed to orgasm. Most guys realize that it’s difficult enough to hold back when you’re horned up; trying to hold back after several weeks of teasing was… not so much difficult as annoying, since I had to stop what I was doing every fifteen seconds and think about work, baseball, or – at several particularly intense moments – my ex. But after about a month, I somehow managed to find my “center” and could take my time making love to her and, given enough time and physical sensation, feel satisfied. While I did not get the feelings associated with orgasm, I would get aroused, plateau for a while (I think I just verbed a noun), and afterward feel almost as if I’d had the orgasm. It was fascinating for me to feel relaxed and comfortable and be able to drift off to sleep, although admittedly it did take a little while for my erection to subside. And at first, I had several completely involuntary emissions – they weren’t orgasms, but physical spasms that expelled semen, usually several minutes after we had finished and were just laying there relaxing.

Perversely, the longer I was denied, the more I enjoyed it. At about six or eight weeks into it, we bought a strap-on harness for me to use, and Mrs. Edge experimented with keeping me locked up for longer periods. She didn’t say she was experimenting, but I could tell; we had more sex with the strap-on (to which we began to refer as “my other cock“), and several times she kept me in for two or three weeks before unlocking me. Once, she went for several weeks. I didn’t say anything or protest, partly because I was enjoying it, but partly because I also wanted to see how it would play out. I counted, though. Four weeks. Five. Six. Oh my.

My insecurity was not due to jealousy, but because I half feared that she was serious, that by my learning how to use it so well she really could go for weeks, months, or even longer without unlocking me. I mean, the orgasm denial was pretty hot, but much of what made it hot was the tantalizing hope of being allowed to come, even if that was “tomorrow.” Like the White Queen’s promise of “Jam tomorrow, jam yesterday but never jam today,” at least there was a hope that today would sneak up on tomorrow. But for the first time I began to be concerned that this might turn into a long-term arrangement with no hope that she would allow me to come.

No hope of coming. Ever.

No, no, no – it’s scary and frightening and making me very insecure. I want to come, of course. Orgasms are fun. They feel great. Gotta clean those pipes once in a while, blow off some steam, relieve the pressure. Right? Right?

Then why was the idea of it making me hornier than ever?

After what was now several months of denial, I again began to have involuntary emissions. At one time I was able to control them, but they began happening every other week, much to the fascination of Mrs. Edge who became interested in the idea of trying to induce them in me, often with a comment that in doing so, she was obviating the need to unlock me at all. From there, we began to discuss just how long the orgasm denial would go on. At the three month mark we opted to go for another three months. By the time five months had gone by, we decided to go until our vacation at the end of July, which would make it well over eight months. Having a “definite” goal in mind made some difference; I no longer felt that I would never get the opportunity to come, and in fact, we even kicked around the idea that I could come as much as I wanted and in any way that I wanted for the entire two weeks that I would be off from work. We called it a “mardi gras” because we also tossed around the idea that once the two weeks were up, I would not be allowed to orgasm until vacation the next year.

Those of you who are turned on by the idea of long-term denial are already aroused, I can just tell. Unfortunately, my wife and I had some relationship issues that were unrelated to the chastity play, but which kept us from pursuing the idea – or indeed, any chastity play – for quite some time. Ironically, by the time 8 1/2 months came around, I was so uninterested in intimacy with her that it wasn’t even arousing to have the device removed. Yet, despite the fact that we were barely speaking to each other, we never even discussed removing the device. I’m still not sure why.

Mrs Edge says that things have worked out pretty darn well for her. 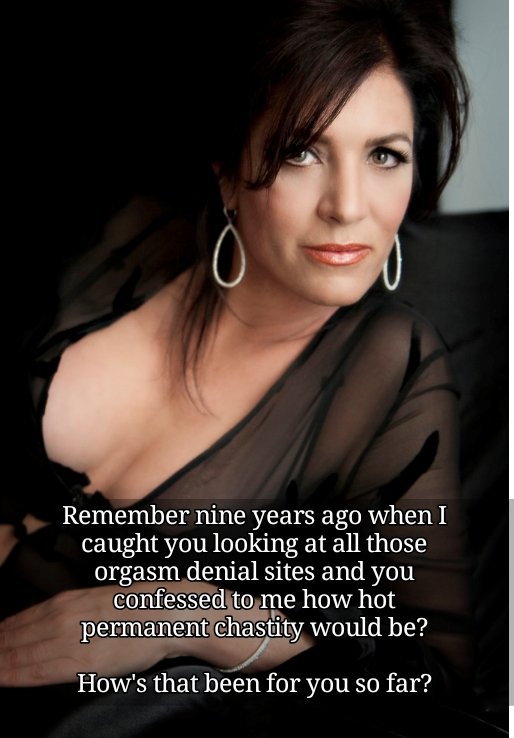 The Grey Geezer Dauntless defender of, um, something that needed dauntless defending. Dammit, I can't read this script without my glasses. Hey, you kids, get off my damn lawn!
View all posts by Tom Allen →
This entry was posted in Sexuality & Relationships and tagged CB3000, CB6000, chastity, male chastity, orgasm denial. Bookmark the permalink.